The Emergence of Languages – Different Opinions 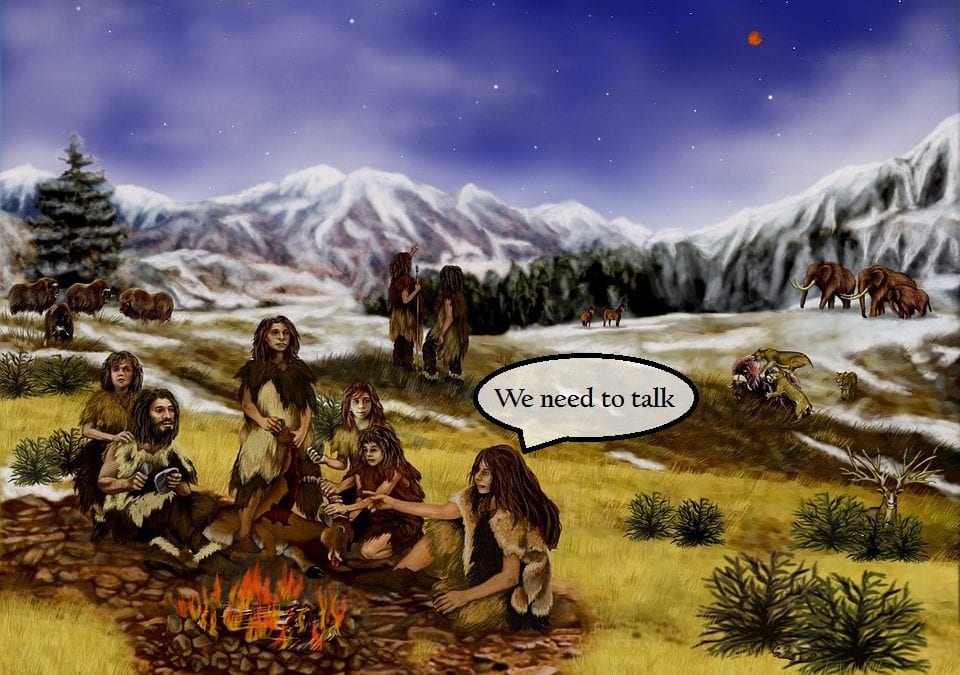 The origin of languages

We know when people invented writing. We also know when the very first translation was done (in the second century BCE on the Rosetta stone). But despite scientific studies, nobody knows when the first signs of oral language appeared, yet many have spoken on the issue. Let’s take a closer look at different perspectives when it comes to the emergence of languages.

Language has a divine origin. This is what the Judeo-Christian tradition says on the subject of the creation of the universe in John 1: 1-3. It is a gift from above, from God to humankind. Similar stories come in all religions and mythologies. But those theories are of course very difficult to verify or falsify, therefore unlikely and invalid for most scientists.

Many have searched for an answer to the question of the Original Human Language. By the 7th century BCN, the Egyptian Pharaoh Psammetichus had performed a famous experiment with a child he brought to a remote place to see what his first words would be. The first word the child pronounced was bekos which means “bread” in Phrygian. He thus concluded that Phrygian was the original language. In the same vein, James IV of Scotland carried on a similar experiment and discovered that the first word uttered was in Hebrew. Later on, Becanus claimed that the original language was Antwerpian Brabantic (a sort of Dutch), Webster Aramaic and Elkins Chinese.

For other famous philosophers and researchers, language is not a gift from the gods. Language appeared because some needs had to be expressed. J.J. Rouseau speaks about “the cry of Nature”. With Herder, they came up with the “bow-wow theory”, claiming that the first speakers imitated natural sounds. O. Jespersen thought that language was needed to communicate one’s emotions, linked with the continuity of the species in courtship behaviors, for example. But for Dunbar and his “Gossip Hypothesis”, language is born because of social links between people. It helps creating a sense of belonging to a specific community. Surprisingly enough, B. Victorri thinks languages developed in order to formulate laws.

The outcome of evolution

The first traces of language observed go back to 3500 BCN, with the first writings. But how can we be sure people could actually talk at that time? We face here the same question of the chicken and the egg: did speaking or writing come first?

According to scientists, language is the fruit of humankind’s anatomy evolution (vocal tract, ear, brain). Regarding the vocal tract,the size and position of the pharynx and larynx (voice box) conspicuously differ between human and nonhuman primates. The descended position of the larynx in the human body is what is thought to have stimulated the spoken language. Contrary to them, nonhuman primates could not produce clearer sounds because of the high position of the larynx in the vocal tract. In addition, monkeys walk on four paws, which means that their pharynx is compressed. They can still produce sounds, but in a reduced way and with more difficulty.

When it comes to the brain, one would think that the size of the brain is what fostered the emergence of languages. But according to scientific research, it is not. Indeed, the human brain developed through the years, but the language learning did not appear when it reached its largest size. What actually played a role was the changing organization of the humans’ brain: brain lateralization. And birds are the only species that show similarities with the human brain. By crying and singing, they also activate two zones in the left hemisphere.

On top of these discoveries, it seems that symbolism might also bring some clue to the research of the emergence of languages. Cave art – see the drawings of Lascaux for example – make scientists think that language was born at an early age. Indeed, if people could represent concrete things while not seeing them, it means that they disposed of the symbolic capacity. And language proceeds likewise: everybody can talk about things they don’t see, should these things be gone or to come.

Linguistic diversity is another key question concerning the emergence of languages. Some linguists consider monogenesis (one originating language which diversified) as being the explanation. But others consider polygenism as being the ultimate theory (different source languages born in different places at different times). The first book of the Bible (Genesis 11: 1-9) gives us an explanation about the existence of diverse human languages. The Tower of Babel’s construction infuriated God. He confused the language of the builders and dispersed them all over the world.

As the emergence of different languages would then be considered a punishment of God, does this mean that translators should not be doing their work? At LingoStar, we think otherwise. We want to bring peace to the world by allowing people to share ideas, discoveries and theories. And anyway, the Bible is the most translated book in the world, isn’t it? If you need professional translations, interpretation services or voice overs, make sure you get a free quote at dev.lingo-star.com. Call us at 604-629-8420 or send us an email at info@lingo-star.com to discuss your next language-related project. We are here to help!