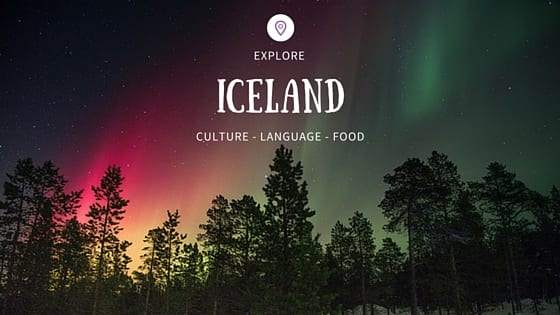 Iceland – The Land of Ice and Fire

Have you ever been to Iceland? If not, you should definitely check out this amazing country! It is about a 5 hour flight from Toronto (you can get cheap tickets at Icelandair, who also provide all-inclusive trips. 😉 ).

But first of all, what can you do in Iceland and what is the culture like?

What to do in Iceland?

If you think there is nothing to do in Iceland, you are wrong! The beautiful landscapes invite you to go on incredible hikes, and a lot of festivals are held in Iceland, where people celebrate together. It doesn’t matter if you visit during the summer – or wintertime; there are plenty of things to do. If you decide to spend the summer in Iceland, you will definitely have plenty of daylight hours, up to 22 hours in June! It is a magical time of year, and taking a stroll in the midnight sun will show you Iceland in a different light.

During the autumn and winter months, Iceland is famous for the Aurora Borealis – also known as the northern lights. Even though the sun shines for maybe 4 hours or less, which may seem depressing, the darkness allows you to view those beautiful lights, which appear out of the blue and disappear just as quickly.

Iceland is called “The Land of Ice and Fire” since it is home, not only to the largest glacier in Europe, but also to the world’s most active volcanoes. Due to this volcanic activity under the earth’ surface, there are also a lot of hot springs. Taking a bath in one of these springs while it is freezing cold sounds relaxing and very exciting! Iceland is also a very popular location for filming movies. For example, in the famous TV show Game of Thrones, scenes that take place “Beyond the Wall” are commonly shot in Iceland.

Did you know that there are absolutely no McDonald’s restaurants in Iceland? Thanks to the economic crash in 2008, the company decided to close their diners in the country, which is  good for the country’s general  health!

When people hear the word “Iceland”, they think of a country completely covered in ice and snow – and all year long at that. However, the climate isn’t actually that extreme. During summer, temperatures reach no higher than 10°C and during winter, temperatures rarely fall under -2°C.

Icelanders are very superstitious. They believe, for example, in elves, and folk-tales have always been a big part of Icelandic culture. Iceland is also very popular for their sagas; one of the most well-known ones is Edda, the body of ancient Icelandic literature contained in two thirteenth century books. Check them out!

Even though Iceland doesn’t have any McDonald’s, that doesn’t mean that people have to starve (well, I am just joking). Icelandic food is very good, and quite healthy! The most famous dish is skyr, a soft cheese that looks and tastes like yoghurt. It is high in protein, and people often like to eat it with fresh berries. Perfect after an exhausting hike!

Icelanders also love lamb. One of the popular dishes is Svið (literally “singed”) which is a singed and boiled sheep’s head that comes with mashed turnips, potatoes and rhubarb jelly.

Something that might be more appealing to a visitor’s taste buds is the iconic Icelandic hot dog – “Ein með öllu”. The sausage contains lamb, which makes it taste different in comparison to the regular hot dog that people are used to. The magic is in the sauces – ketchup, a sweet brown mustard and remoulade!

Do you speak Icelandic?

Icelandic is one of the most difficult languages to learn. It is incredible that the language has remained the same for hundreds of years, so it is easy for Icelandic citizens to read ancient papers. Instead of adopting foreign words, Icelanders create new ones:

Computer, for example, is “tölva”, a combination of “talva” (digit) and “völva” (prophetess).

One final point of interest: Icelandic newborns must be given a name from a database of approved names, or the proposed name must be sent to a special naming committee –all to preserve the language!

You need a translation to be done in Icelandic? We can help you! Here at LingoStar, we have professional translators who are native speakers of Icelandic. We also have a range of other services to offer such as revising, updating and localizing your content into more than 100 languages. And if you ever wish to improve your language skills to have better job opportunities, we also provide language tutoring services! Don’t hesitate to give us a call at 604-553-4520 or email us at info@lingo-star.com to discuss your next language-related project. To get a free quote, click here. We look forward to hearing from you!