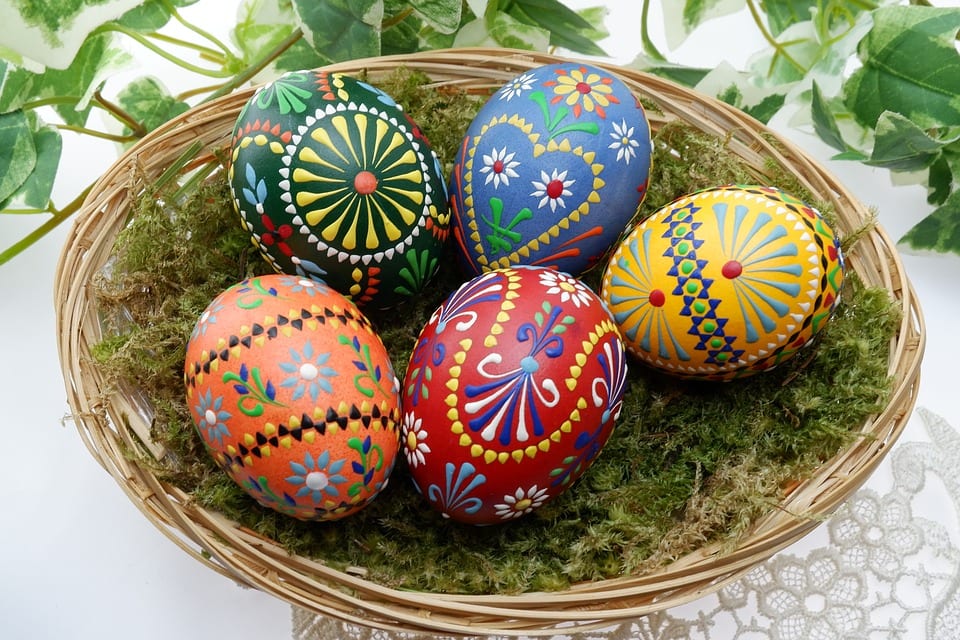 Easter Sunday is a celebration for millions of people around the world who honor the resurrection of Jesus, described in the New Testament as having occurred three days after his crucifixion. For children, it is also the day the Easter bunny hides chocolate eggs for them to find in a much-celebrated Easter Egg Hunt. Easter corresponds with the first Sunday following the full moon after the March equinox, and occurs on different dates around the world since western and eastern churches do not use the same calendar. However the egg hunt is not the way every culture celebrates Easter. Here we detail some different Easter traditions around the world.

In Prizzi, Sicily, villagers do the “Abballu de daivuli”, dressing as devils wearing terrifying zinc masks and red robes and pestering  as many “souls” as they can (which really means making them pay for drinks). In the afternoon, the Virgin Mary and the risen Christ save the day by sending the devils away with angels.

On Holy Thursday in Verges, Spain, the “dansa de la mort” or “death dance” is performed. Everyone dresses in skeleton costumes and parades through the streets. The procession ends with frightening skeletons carrying boxes of ashes. The macabre dance begins at midnight and continues for three hours into the early morning.

In Czech Republic there is an Easter Monday tradition in which men spank women with handmade whips made of willow and decorated with ribbons. According to legend, the willow is the first tree to bloom in the spring, so the branches are supposed to transfer the tree’s vitality and fertility to the women.

One of the most popular Easter traditions in Hungary is “Sprinkling”. It is observed on Easter Monday, which is also known as “Ducking Monday.” Boys playfully sprinkle perfume or perfumed water on girls and ask for a kiss. People used to believe that water had a cleaning, healing and fertility-inducing effect.

Pouring water on one another is a Polish Easter tradition called Smingus-Dyngus. On Easter Monday, boys try to drench other people with buckets of water, squirt guns or anything they can get their hands on. Legend says girls who get soaked will marry within the year. The refreshing tradition has its origins in the baptism of Polish Prince Mieszko on Easter Monday in 966 AD.

On Easter, Norwegians love to read crime novels. Publishers come out with special “Easter Thrillers” known as “Paaskekrimmen”. The tradition started in 1923 when a book publisher promoted its new crime novel on the front pages of newspapers. The ads resembled news so well that people did not realize it was a publicity stunt.

On the morning of Holy Saturday, people in Corfu participate in the traditional “Pot Throwing”. They throw pots, pans and other earthenware out of their windows, smashing them on the street. The throwing of the pots welcomes spring and symbolizes the new crops that will be gathered soon.

In Haux in the south of France, a giant omelet is served to the people of the town. The omelet uses more than 4,500 eggs and feeds up to 1,000 people. The story goes that when Napoleon and his army were traveling through the south of France, they stopped in a small town and ate omelets. Napoleon liked his so much that he ordered the townspeople to gather their eggs and make a giant omelet for his army the next day.

For 130 years, the White House has hosted the Easter Egg Roll on its South Lawn. The main activity involves rolling an Easter egg with a large serving spoon, but now the event boasts many more amusements, like musical groups, an egg hunt, sports and crafts. This year’s theme is “Ready, Set, Go!” and will promote health and wellness, featuring activities that encourage children to lead healthy and active lives.

LingoStar wish you a Happy Easter!

Our own culture shapes the image we have of the world. At LingoStar, we stand by this and want to help people get a better understanding of the world. Therefore, here at LingoStar, we provide a range of language services in all kinds of language varieties from translation and typesetting, interpreting services, subtitling and more! For more information about our services, visit dev.lingo-star.com, send us an email at info@lingo-star.com or give us a call at 604-629-8420. We are here to help!