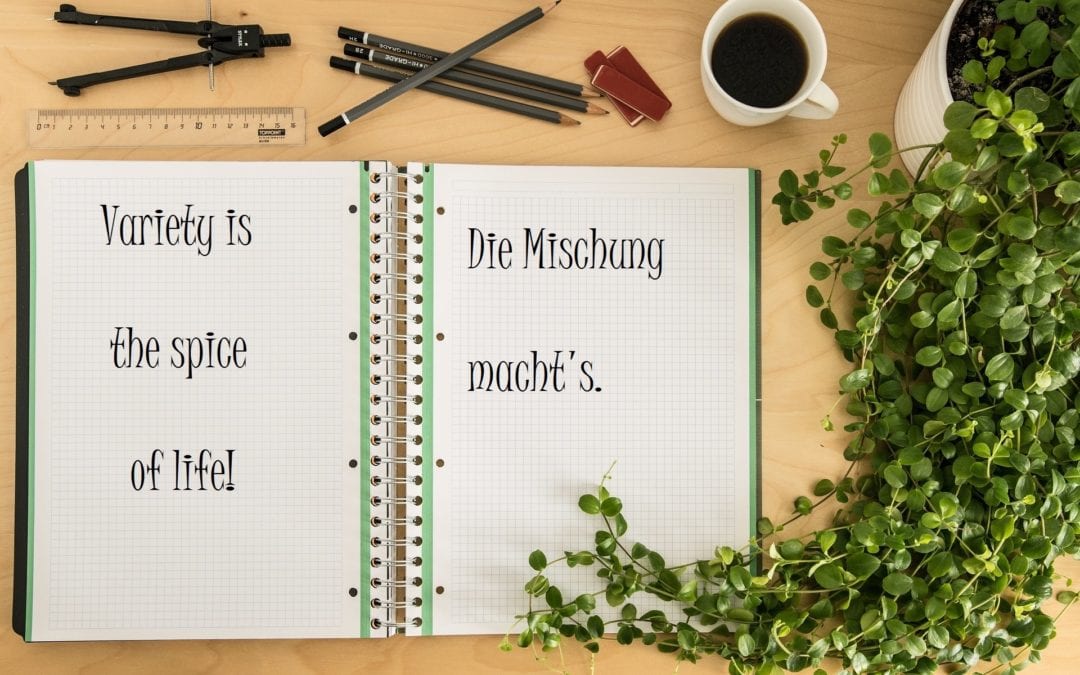 Wrap Your Head around German and English Idioms

Do you think idioms are a pain in the neck? Or do you have a soft spot for them? Well, let’s face it, if you learn a new language they will be part of your learning experience, come rain or come shine. Native speakers, however, use them most of the time without even realising it. So no need to beat around the bush, let’s get down to business and take a closer look at German and English idioms!

Idioms are fixed phrases or expressions with a figurative meaning. Most of the time, the literal meaning does not express the figurative one at all, as in to kick the bucket. And it would sound weird to say, for instance, to kick the pail. Therefore, the words are set in stone. Sometimes, however, it is funny to play with idioms and deliberately change them according to the context you are in. Nevertheless, many idioms used to be literal, but became disconnected from their original meanings. Consequently, they only exist in their figurative meaning nowadays. For some idioms you can trace this development, for example, to let the cat out of the bag. Others, in contrast, are very ambiguous and it is not clear what their origin is, for instance, to pull one’s leg. Read further for the origins of these idioms.

Some idioms have a transparent meaning. In other words, even as a non-native speaker you can figure it out, because they are logical, like the early bird catches the worm. Maybe it is a concept that you also have in your native language. Even though idioms can be completely different from one language to another, making them harder to translate, they can also be quite similar. Let us compare a few German and English idioms.

Both German and English are Germanic languages. Germanic tribes from the area nowadays known as Northern Germany and Denmark went to the British island and spread their language, called Anglo-Saxon. As a result a lot of German and English words look alike or are identical, like father – Vater, hand – Hand, or book – Buch. Besides, have you ever wondered about the strange way Shakespeare wrote? Thou doest? Thee, thy, thine, thyself? Yes, this is a Germanic trait of English. So, how did German and English idioms influence each other?

The Best of Both Worlds: German and English Idioms in Comparison

to pull someone’s leg: The origin is not confirmed. Some say it originally described how thieves tripped victims to rob them. However, it was first mentioned in the Ohio newspaper The Newark Daily Advocate in February 1883. The mention explained what the idiom meant, so it must have been used before and was considered a neologism.

jemanden auf den Arm nehmen ‘to take someone on the arm’: It is confirmed since about 1850. It carries the underlying meaning that you treat an adult the same way you treat a child by carrying them in the arms. Therefore, they are naive and gullible.

The Consequences of Love

Love is blind: It first appeared in Geoffrey Chaucer’s Merchant‘s Tale around 1405, but later was made popular by Shakespeare.

Liebe macht blind ‘Loves makes blind’: It is most likely based on a quote by Plato in his Laws. Chaucer was interested in philosophy as well, so it is likely that he also knew Laws. So both German and English have a common ground in Greek philosophy. But why does English use a static affirmation, while the German phrase is active? The clue maybe lies in the different translations of the Greek original. The English translation goes: “For the lover is blind in his view of the object loved, (…)”. You already have this static affirmation. In German, on the other hand, it was translated as ‘the lover becomes blind’: “Denn der Liebende wird blind in Bezug auf den Gegenstand seiner Liebe.”

The First One Has the Best Chance

The early bird catches the worm: You can find the first written proof of this proverb in the 1636 version of William Camden’s ‘Remains Concerning Britain’. It seems very transparent, so it makes sense why people used it. Unfortunately, there is no verification as to why they used a bird specifically.

Der frühe Vogel fängt den Wurm: It is exactly the same as in English, since it is borrowed from English in the 1980s. But there are also more “German” ways to express similar ideas. Morgenstund hat Gold im Mund. ‘The morning hour has gold in its mouth’, for example, is based on the Latin phrase Aurora habet aurum in ore and has been in use since the 16th century as a German idiom. Likewise to the bird-idiom is Wer zuerst kommt, mahlt zuerst. ‘Who comes first, grinds first.’ It derives from the fact that in the middle ages, peasants had to line up to grind their grain.

To Reveal a Secret

to let the cat out of the bag: There are two possible origins. The first one is about livestock fraud. In the 1700s and before, sellers at the markets would sell a pig, but put less valuable cats in the bag, which would lead to a big surprise for the buyer. The second one refers to the cat o’ nine tails used to punish sailors. It is a whip with nine tails, which left scratch-like marks on the skin of the punished, which consequently lead to the name.  In order to hinder it from drying out in the salty air on sea, it was kept in a bag.

die Katze aus dem Sack lassen: Again, it is the same as in English. In German, in addition, there is the expression ‘to buy a cat in a bag’, but this refers more specifically to an act of buying. It is said that this idiom developed from a story of Till Eulenspiegel in which he sold a cat disguised in rabbit’s fur. The use of ‘to let the cat out of the bag’ might be a borrowing from English.

To Be a Co-Driver

to ride shotgun: In the Wild West, the task of the person sitting next to the driver was to keep away or kill potential robbers with a shotgun.

Beifahrer sein ‘to be the co-driver’/vorne sitzen ‘to sit in the front’: German coaches probably also had to watch out for robbers as well. But in German speaking countries this era is not as popular as the Wild West, so maybe this is why Germans did not develop an idiom for riding next to the driver, but instead use a plain description.

Idioms are just as right as rain, as so are German and English idioms as well. So don’t worry about them. Here at LingoStar, we hit the nail on the head with our translations and have professional translators available for your project. We provide a range of language services including website translation, voiceovers, interpreting services and more! For more information, contact us by calling 604-629-8420 or emailing info@lingo-star.com to discuss your next language-related project. You can also submit a free quote via our website dev.lingo-star.com. We are here to help!