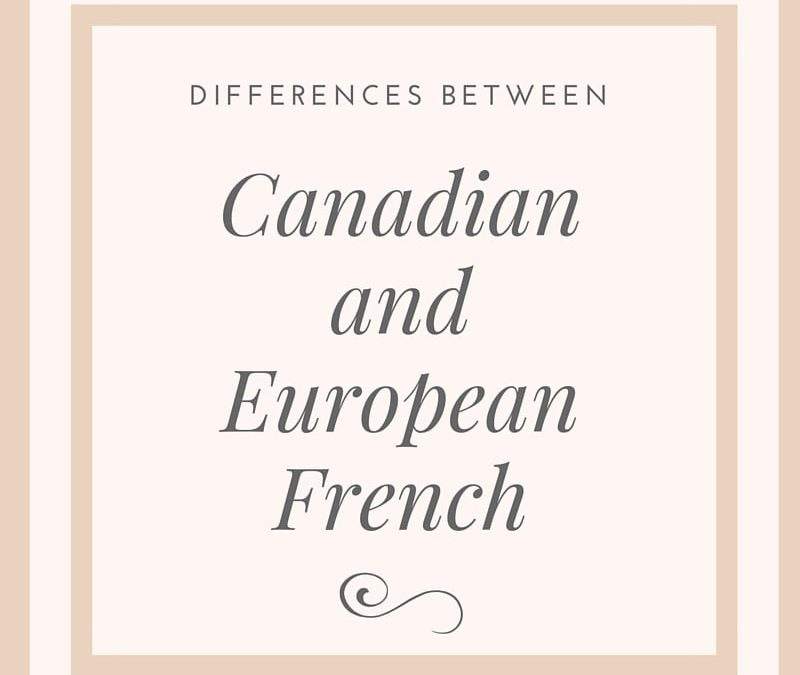 Differences between Canadian and European French

The biggest differences between European and Canadian French can be found in their vocabulary and expressions. Due to their different histories, these two variations of French have developed somewhat differently over time. For example, up until the 1960’s Quebec was very religious and Catholic. However, during the “Quiet Revolution”, a period of intense social and political change, the people in Quebec saw the Church as a repressive force and wanted to separate themselves from it. This is why you will hear curse words related to the church such as tabernacle (a similar English word would be “damn”).

The attitudes of both European and Canadian French are also different. French people are proud of their culture and language. In Paris, for example, people assume that you are able to form at least basic French sentences. But don’t worry. They will help you even though they don’t always understand what you are saying.

Quebecers want to share their language with everyone and are really helpful if you struggle with it. They are happy when you try to speak French to them because then they know that you are not taking the easy way and just speaking English. They welcome everyone who wants to learn French.

Charter of the French Language – Protect the Canadian French language

Quebecers are still fighting to keep the language alive.

In 1977, the Charter of the French Language was passed in order to protect the French language. It states that every product and all official information passed on to its citizens must be written in French and English. In France, on the contrary, not everything needs to be translated. The European French say “Coke light” while in Quebec the translation “Coke diète” should also appear on cans and bottles.

Quebecers use courriel instead of “email”. Don’t get confused while driving around Quebec. Their stop signs say arrêt instead of “stop” (like in France). However, Quebecers use the word char (which means “tank”) for “car” instead of the French word la voiture.

Imagine you’ve learned French in France and now you would like to live in Quebec for a couple of months. The first thing you should do is spend as much time as possible with people from Quebec to train your ears and learn about the Quebecois culture. Try to stay in districts where a lot of people speak Canadian French.

If you use Canadian French in France, people probably won’t understand you, since the vocabulary and pronunciation are different.

Here at LingoStar, we have professional translators who are native speakers of Canadian French. We also offer a range of other services such as revising, updating and localizing your content into more than 100 languages. And if you ever wish to improve your language skills to have better job opportunities, we also provide language tutoring services!

Don’t hesitate to give us a call at 604-629-8420 or email us at info@lingo-star.com to discuss your next language-related project. To get a free quote, click here. We look forward to hearing from you!

Check out our blog post about soccer and translation!