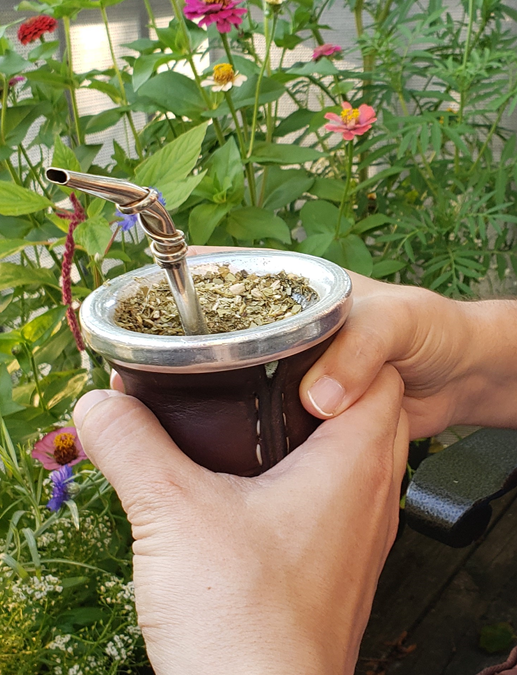 More than a drink

Just as British people religiously enjoy their 5 o’clock tea, some countries in the southern hemisphere share a very popular drink: “el mate.” This tea-like infusion (also known as chimarrão in Brazil) is made with yerba mate and is enjoyed by children and adults at any time of day. What’s more, it has been an integral part of the culture in Argentina, Uruguay, Paraguay and southern Brazil for many years now. So, let’s learn a little more about this important drink.

Yerba mate was already being consumed long before the “new world” was discovered. Actually, it was the Guaraní people who inhabited parts of South America who introduced the plant to the European settlers. The settlers began to cultivate it and to make it well-known throughout the rest of the southern regions. Although the yerba mate cropping tradition almost disappeared when the Jesuits were expelled from the region, native people took over and transformed it into commercial harvesting.

“El mate” is also related to the image of “el gaucho”, a popular cowboy-like figure from Argentina, Uruguay and the southern part of Brazil. El gaucho is commonly depicted as a horseman dressed in leather boots or espadrilles, a long-sleeved cotton shirt and baggy pants (bombacha), carrying a bola (best known as boleadora) or a long gaucho knife (facón).

How to prepare “el mate”

First of all, to start “el mate” we need the following things:

Once we have gathered all the necessary elements, we can prepare “el mate”. First, grab the gourd and fill a little bit more than half of it with yerba mate. Second, cover the top of the gourd with your palm and shake it. This will help decrease any bitter taste and avoid the bombilla getting clogged. Third, lean the yerba mate to one side of the gourd and place the bombilla in that space. Fourth, pour a small amount of warm water in the space where you placed the bombilla. Pouring water only in that space will avoid soaking all the yerba mate and will prevent “el mate” from tasting bad after pouring hot water in it several times. Fifth, sip and enjoy!

What does “el mate” represent to South American countries?

“El mate” is not just a drink but a popular symbol for some South American countries. Despite yerba mate containing some healthy benefits and a high level of caffeine, people drink it mostly for the social bond it creates. People start drinking “el mate” at an early age. It is usually shared between two or more people in public places and in every home, but one can also drink it alone. Although many people around the world find it strange and even unsanitary to drink from the same bombilla, sharing “el mate” creates a special bond for those involved.

To put it differently, “el mate” represents companionship when you are studying late at night, bonding when you are with friends and family, and a break when you are overwhelmed by your daily routine. If you have the chance to travel to any of these countries, you’ll see that every family has their own “mate kit” at home. And if someone gives you a mate as a present, consider it to be a token of friendship!

We can help you!

Are you planning to visit some South American countries to try “el mate” and other local dishes? Do you need some documents translated into Latin American Spanish for your trip? We can help you with that! At LingoStar, we provide a range of language services in all kinds of language varieties like translation and typesetting, interpreting services, subtitling and more! For more information, contact us by calling 604-629-8420 or emailing info@lingo-star.com to discuss your next language-related project. You can also request a free quote via our website lingo-star.com. We are here to help!